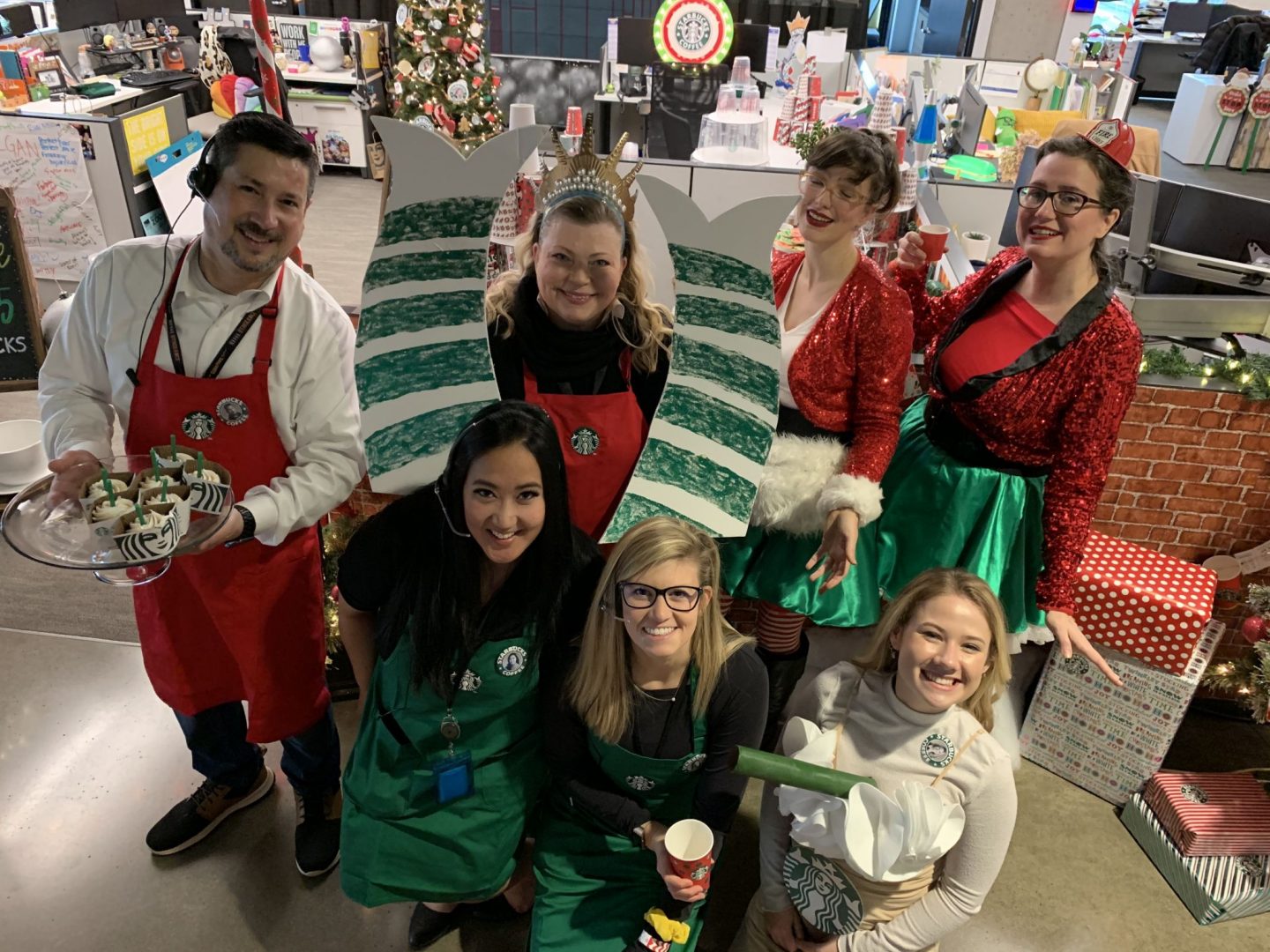 It’s that time of year again! And the KING 5 Sales Department annual holiday pod decorating contest was on steroids this time around. I’ve worked with lots of creative teams over the years, but I’m telling you this group is on another level.

We spend nine months out of the year smack talking in between meetings and down hallways about who won last year, who will win this year. Then we spend two months not talking about it while we secretly meet with our team pods behind closed doors with the curtains drawn talking about our Pinterest boards in low whispers, supplies we will need, and who will do what. The next thing you know we’ve wrapped up November sweeps and December is upon us.

The most important thing is to not tip off another group on what your pod is doing for their theme. The element of surprise and the surgical precision of our crafting skills begs for NBC to make a show about us. (NBC if you’re reading this is a shameless plug to bring Making It to Seattle! “LET’S MAKE IT!”)

In all honesty, the same pod has won the last three years in a row and it’s never been my pod. Year one my pod did Bar Wars “May the Booze Be With You” and I convinced myself it’s because my pod at the time was made up entirely of managers.

Year two was a different pod, due to some reorganization on the floor, and now it was a mix of managers and sales staff. Desiring to work with what I already owned, we went with Christmas in July and I brought in my entire pool floatie collection. Nope, didn’t win that year either. (Which on the inside, somewhat kills me because I’m the “official” creative ideator on the floor. I’m not bragging, that’s actually a big part of my job.) I’m fairly certain I still have grass skirts and a few deflated floaties stored under my desk somewhere…want to check out 2017? You can see it here.

Year three, I’m not going to lie. I phoned that shit in. I was a little bah humbug in general, as were the podmates surrounding me. At the last minute we whipped together the White Elephant idea. With one quick Amazon Prime order for an inflatable elephant and a call to a pod member’s husband that works at Kohl’s, which happened to be selling white elephant gift boxes at the time, we decided we were going for clever and minimalist. Guess what? Didn’t win that year either but it did only take us 5 minutes to clean up. Looking back at the photo below, we didn’t even do a decent job of wrapping our pod in wrapping paper. Look at how it doesn’t cover everything and the couch is half wrapped. I will say, for the co-workers who did take the time to read the white elephant gift boxes gave us compliments on how funny they were. They were pretty funny! Even funnier was the fact we paid for boxes and they didn’t even have the real gag gifts inside of them. Just the boxes…our chalkboard sign should have read “Take a Number, we don’t care!”

Last year, I will say, the other pods did really bring it. Want to check out that video? You can check it out here.

So this year it was go big or go home. Yuna had moved over from the winning pod with two wins under her belt. We had two new hires that were “fresh ‘holiday decorating’ meat” ready to compete. I’d been pinning ideas on Pinterest all year and we met in early October to finalize our plans and again in early November to assign duties. The key to any successful pod decorating team is to divide and conquer.

I was pretty excited to do Candy Land and Yuna wanted Starbucks Christmas, a great idea. We voted as a team and as you can see Starbucks won out. Thank God for Yuna! If we had done Candy Land our pod would have closely mirrored the Gingerbread Village. I noticed that pod also added “and Cookie Cafe” to their title and I had to wonder was that in response to our Starbucks theme? I warned you the competition is fierce. I may never know. LOL

I phoned a friend at a local Starbucks location who’s name I won’t reveal in case the large donation of cups, aprons, coffee cup sleeves, and gift cards might get that person in trouble. (You know who you are and you know how grateful I am! MUAH! XOXO!) We had all started saving our left over Starbucks cups, so it was a real victory to get such a large donation of unused cups to craft with that hadn’t already been filled with liquid and covered in our lip prints. Desperate times call for desperate measures.

We brought in the big guns, and by big guns I mean Yuna’s husband, to build out our store front. Ryan Subica was in charge of bringing my lifesize coffee cup with steam coming out of the top to life with his fog machine. He promised me we wouldn’t set off the building fire alarms. Megan and Heather crafted their little hearts away and Sara kept the team fueled on pizza and brought her husband down to help us those late nights at the office as we set up before game day. I drove to Centralia and borrowed my mom’s Christmas tree along with my plastic bins of holiday decor that haven’t seen the light of day in years since I downsized from the ‘burbs. (I downsized by upsizing into my parents garage. Love you Mom & Dad!) I spent nights watching Making It and filling clear christmas balls with coffee beans and creating my Starbucks Siren legs. (She’s a siren, not a mermaid. I did my research. Must stay on brand at all times.) And our final secret weapon was a live performance from the Sugarplum Elves that were meant to serve as our “buskers” outside of our Starbucks Christmas store front. Thank you again Sprinkles and Pumpkin! xoxo

Curious how the voting goes? It’s intense. Everyone in the building gets 3 tickets to vote for their favorite(s). This meant a few of us, let’s call us “over achievers” started campaigning for votes with quiet desk visits and emails. We’re one of the best sales teams in town and there is a reason why. We go after it. Then, at our annual Home Team Harvest silent auction, which is always the following day, each guest attending that event gets one vote. More campaigning and strategically inviting friends, clients, and family we knew would vote our way and shop the silent auction. This thing is serious people. In fact, I heard a few people joking that we should be discussing the competition when we interview potential new hires.

All jokes aside, guess what? WE WON!!!!!!!!!!!! But… everyone is a winner, right? WRONG! Not in this house. There is only one Golden Santa Trophy and he’s getting a new home. LOL In all reality, every team did really bring it in a way it’s never been brought before. There is so much cleverness and attention to detail that no amount of photos or video can properly capture. Have you visited Enchant across the street from the KING 5 station at T-Mobile park? I’m telling you we give them a good run for the money.

For now we’ve all agreed since this year was so off the hook that next year is a buy year to give everyone a little break. The fact we can pull this off while also closing so much business for 2020 and the looming 2020 Tokyo Olympics ahead is both impressive and impressively tiring. Not to mention, we still have to clean it all up. We say that now, but come June when we’ve gone months without hearing a Christmas tune and the smack talk picks back up, who knows what might happen? And as we close out a decade and a reflect back at my choices over the last 10 years, I will always be grateful I made the decision to join the KING 5 Home Team.

If you or someone you know wants to join our team, make sure to check out our job posting page for updates. It’s an insanely cool place to work with amazing people. 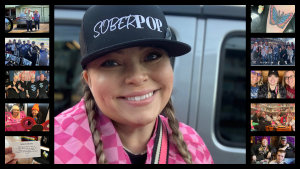 At the end of each year, like many people, I reflect on all the things I am grateful for. What was good? What was fun? What was hard? What was easy? What surprised me? What would I like to forget? What could I do better in the year ahead? And what about those non-eventful moments?